Promotion in job and astrology. Whether I will get promotion in the job or not if yes then when. what should I do for getting the promotion ? I face everyday this type of questions by the Peoples, especially who believe in astrology. Some Peoples get promotion with a little effort and someone doesn’t after their hard labor. So that question is that what’s that missing factor which keeps success away from you despite so much of hard work? However, who will get promotion in his job or who will achieve success can be very easily predicted through astrological analysis.
In Astrology Success and unsuccessful depend on planet’s position in your horoscope. If your planets positions are favorable and you do work accordingly result will come positive. If your planets are favorable but you don’t work according to the nature of the planets result should not come favorable. If planets positions are unfavorable and you do hard labor result will not come favorable.
In both condition which planets Mahadasha and Antardasha are going on? If promotional Dasha and transit both are favorable than sure you will get the promotion if not favorable you will not get it. Through astrological analysis of horoscope, we can also find out the time of promotion in the job of an individual. The role of Mahadasha, Antardasha and planets transits are most important for timing of the promotion.
Here I am giving some astrological combination for promotion and prosperity. This combination will help an individual to an analysis of their horoscope.

Some important astrological combination for promotion in Job

1. The astrological point of view we should see the 2nd house (house of wealth) 9th (house of fate and prosperity) 10th house (house of profession) and 11th house (house of income) for promotion in job or business.
2. When all four houses (2nd, 9th, 10th, 11th) from the special relationship with each other by the aspect, conjunction or placed in concerning house then become a chance for promotion. The 10th house is the house of profession so this house is the most important house for promotion, job, and career.
3. Possibilities to get the promotion during the Mhadasha and Antardasha (period or sub- period) of planets which form a special relationship with the 10th and 11th house/lords in the horoscope. The 11th house is the house of income. It is auspicious if an exalted planet transits through this house or trikon house.
4. If 10th or 11th lord are exalted in D1, D9 or D10 chart and period or sub – period has been started and also form relationship with 2nd, 9th, 10th or 11th house then sure you will get promotion in the job or in business.
5. Vedic astrology specifies that the periods of the Ascendant lord, 10th Lord and of the planets exalted in the birth-chart make a person successful in their life. If these periods form a relationship with the house of income than his income will increase and if these periods form a relationship with the 9th house/lord, then it will be more auspicious for native.
6. In astrology transits of planets in the horoscope is very important. If period or sub period lord is transiting with related house or aspect to the related house then result will come positive. If your dasha is favorable and transits are not favorable then the result will not come positive so both dasha and transits both are a most important thing.
7. We should also see double Gonchar transits on the related house these transits are favorable then the result will come surely.
8. Pada Lagna is also important for the promotion in job. If pada lagan’s lord or 10th Lord from pada lagan dasha or transits are favorable then the result will come positive. 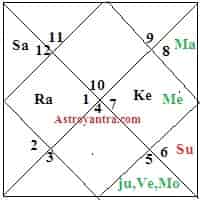 Promotion in Job analysis of above horoscope

In this horoscope, the native was working as sales and marketing manager. When was join salary was only Rs 15000 thousand per month but after sometimes boss of this company impressed with his work increased salary Rs 35000 thousand per month and after some time an another company offer job of this person as an Assistant General manager? This company fixes Monthly emolument of Rs 1 lac. Now see what planetary combination in this horoscope that he got a promotion.

He joined as an assistant General Manager in Rah/Rah/Mar/Me/Sat on dated 30/1/2015. In this horoscope, Rah placed in 4th house and aspect 10th house and 10th Lord Venus by 5th aspect. Mars is the Lord of 3rd and 11th house eleventh house signifies income and third house transfer or change in place. Mars placed in own house and aspect 2nd house (house of wealth) also. Mars is also exalted in the D9 chart. Mercury is the Lord of the 9th house this house signifies fate and prosperity of the native. Mercury placed in the 10th house. Saturn is Ascendant lord placed in 3rd house and aspect 9th house (house of fate & prosperity). It is very clear that all planets are connected with promotional houses. In that time gochar transits of planets were also favorable So that he get the promotion.